If your birthday happens to be in June count yourself lucky because you have not one, not two, but three birthstones to choose from! You summer babies get to choose from the sophisticated and timeless Pearl, the rare and magical Alexandrite, or the phenomenal and far out Moonstone.

For centuries pearls have been a favorite adornment among kings and queens and today are evocative of elegance and grace. Unique among their gemstone brethren, pearls are the only gem to be harvested from a living creature and today pearls are cultivated in both freshwater and saltwater from the waters of China and Japan to South Seas of the Pacific and to the islands of French Polynesia.

Grown in lakes, rivers, and ponds in China, Freshwater Pearls appear similar to Akoya Pearls in shape and size, but are generally smaller and less symmetrical.

Cultured in China and Japan Akoya Pearls are the most popular type of pearl; known for their shine and luster they come in a variety of shades ranging from the sought after creamy white to shades of rosy white and silvery blue. The finest quality of Akoya pearls are known as hanadama meaning “Spherical Flower” each coming with it’s own certification.

The largest and mostly highly valued South Sea Pearls are found in the waters of Indonesia, the Philippines and Australia. They range in colors from white and slivery blue to pale golds and yellows.

Typically coming from the atolls and lagoons of the SouthPacific, Tahitian Pearls range in colors from silver and green to charcoal. Most of the time what people think of as “black” Tahitian Pearls are actually an array of iridescent hues and seem to adapt to the colors that they are worn with. Discovered in Russia’s Ural Mountains in the 1830s, Alexandrite is known as an “emerald by day, ruby by night” due to it’s unique chemical composition. A rare variation of the mineral chrysoberyl, it’s formation requiring specific geological conditions is what gives it the ability to appear green or bluish-green in daylight and red or purplish-red in incandescent light.

While still a very rare gemstone, Alexandrite has also been found in Brazil, India, Burma, and a few countries in Africa like Tanzania and Zimbabwe. The strength of the colors vary from country to country but a clear distinction can still be made between the green hues of daylight and the reddish tones of incandescent light. 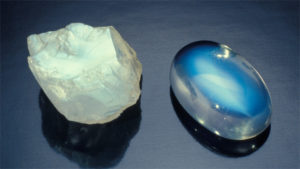 The least commonly known birthstone for June is the Moonstone. Given it’s name by the Roman natural historian Pliny who believed that the appearance of the stone altered with the phases of the moon, the seemingly mystical phenomenon is called ‘adularescence’.

Part of the mineral family called feldspar, moonstones are formed in many igneous and metamorphic rocks and can come in an array of colors from blues and greens to peaches and champagnes. Sri Lanka is known to produce the finest Moonstones but they can also be found in India, Australia, the United States and a few other countries.